Now baking and burning stuff at...

Kitchen of Disorder
Posted by Sarah Ross at 16:32 No comments:

After weeping uncontrollably over the loss of my youth for the last six months, I finally feel able to talk about the trauma of turning 30.

I am, of course, talking shit. I haven't blogged about it sooner because a) I've been busy baking a lot of cakes, b) I was so worn out from having to document my life that I couldn't be arsed and c) there wasn't really a lot to say.

That's right, there was no horrific meltdown, I haven't suddenly started pissing myself when I sneeze and gravity hasn't pulled my arse cheeks any closer to the back of my knees. In fact, turning 30 was pretty much like every other birthday. Sorry to be such a let down, but there was no big drama.

Speaking of let downs... I guess it's confession time. I didn't complete my 30 challenges before 30. I gave it a good shot though, I worked hard and I tried new things, but sadly I didn't quite get there. C'mon, 27 out of 30 ain't bad!

I actually thought I'd be really disappointed with myself if I didn't complete everything, but I'm not at all. My 29th year was awesome fun, I've laughed a lot and I've discovered talents I didn't know I had. In fact, I got a lot out of this little project of mine: I have a new found love of baking, I've started sewing again, I've realised I can do (some) sporty things and I can give anything a go when I really put my mind to it.

It would've been great to have completed everything on my list, but I'm sure I'll get round to ticking them off at some point.

There have been so many awesome moments during the last year that it is so difficult to choose one.

If I had to pick one stand out challenge it would be learning to snowboard as this was something I'd always wanted to do and it was so much fun. The fact I did it and did it well was also quite a triumph since I'm not the sporty kind at all.

Giving blood was also a very rewarding experience and really worthwhile, I just wish I'd got round to doing it sooner. I have to admit I haven't been back since, as my plans to donate this summer were scrapped due to the heatwave. If I faint after giving blood in normal conditions then that's just asking for trouble. Jeez, I'm such a flaker.

Rollerskating with my friends was also awesome fun - thanks Laura, Mandeep and Lucy for such a great day!

There were no challenges that I absolutely hated. I think the only bad times I had during this whole thing were when I was in pain. Like after I learnt to snowboard, which hurt like hell and left me battered, bruised and struggling walk for days afterwards. I'd never had a swollen arse before and I don't really want another one. Similarly, I suffered a lot after BMX-ing too as my legs were really badly bruised and stayed various shades of black and purple for weeks afterwards.

The best thing about doing this whole thing was having the opportunity to do cool stuff with my lovely friends. Without them many of these challenges wouldn't have been possible and I'm very lucky that they've been kind enough to support me when I've insisted on dragging them along to something they probably don't want to do.

On that note, a special thank you goes to the long-suffering Dan, who has put up with the most during the last year and never once complained.

I'd also like to say a big thank you to everyone who visited my blog, read a post, commented or said something encouraging. There have been way more of you than I ever imagined.

Thanks also to those who Googled some really weird stuff and found your way here as a result. My personal favourites were 'shitting in wellies' and 'she shat herself horse riding'. You have some bizarre interests, but thanks for making me smile.

One thing that has pissed me off since turning 30 is that people ask about marriage and children a lot more. It doesn't matter how many times you tell people that you don't want children, those who are already parents will tell you that you are missing out and you will either change your mind or regret not having children in later life. Please don't be so patronising, I don't envy your life and mine certainly isn't less fulfilling for choosing not to spawn. So please shut the fuck up.

That's the only downside really. Other than that, life is ok as a 30-something. Instead of thinking my best days are behind me, I'm focussing on the positives. I'm a lot smarter than I was in my youth, I find myself caring (even) less about what I look like and I've been asked for ID on numerous occasions, which is nice.

Plus, I have way bigger things to worry about now. What's going to happen when I'm on the cusp of turning 40...?

Email ThisBlogThis!Share to TwitterShare to FacebookShare to Pinterest
Labels: in dog years I'm already dead, life after 30, milestone birthdays, Project 30, things to do before turning 30, turning 30

My 30th birthday celebrations didn't centre entirely around buying records. I managed to fit in some other cool stuff too while I was in London...

I'll be honest with you, waking up as a 30-year-old sucked. Completely. But I discovered the fastest way to cheer yourself up on a milestone birthday is by consuming a large amount of sugar for breakfast. That's the only reason I'm smiling in the photo below, because I'm off my face. 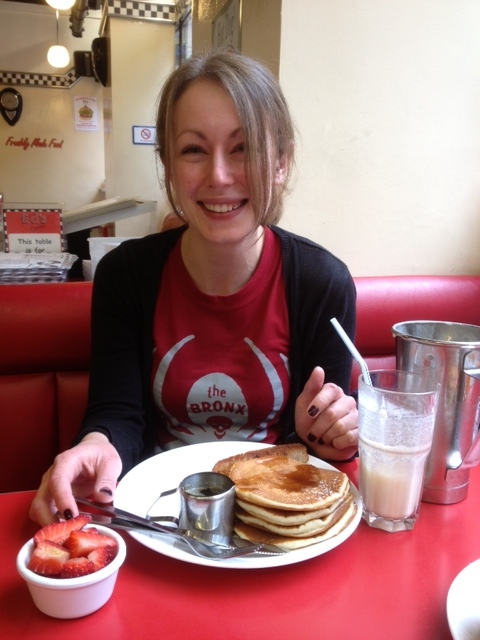 The cornerstone of any nutritious breakfast:
Pancakes, sausages and strawberries with maple syrup.
Washed down with a peanut butter milkshake. 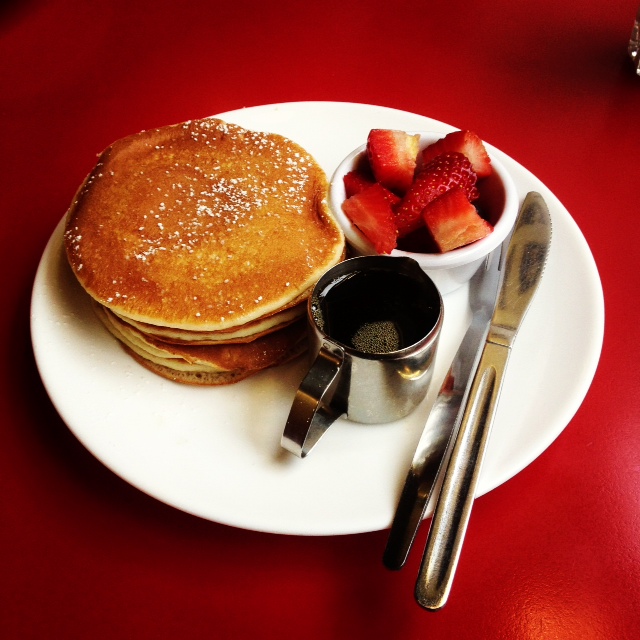 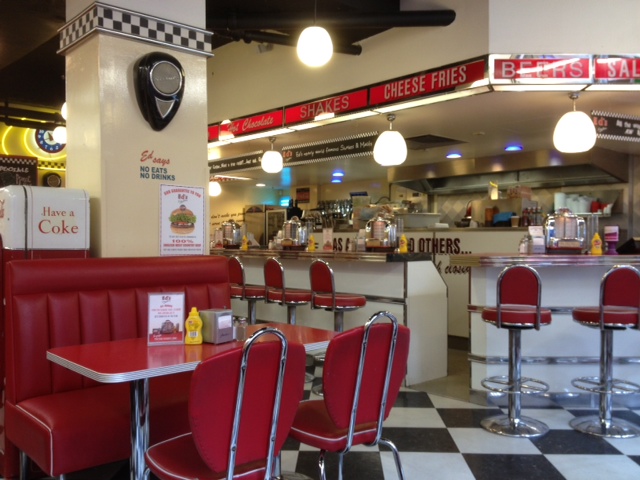 
In between a bit of record buying there was time to visit the Trocadero arcade, which used to be awesome, but isn't so much these days as they got rid of a load of games. Still, I did find some to keep me entertained. 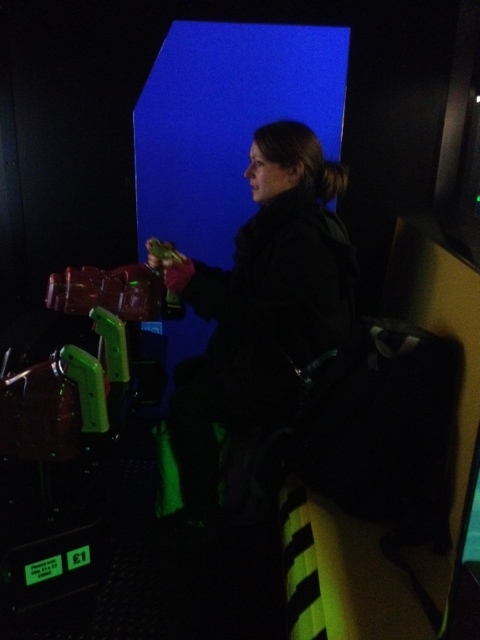 There's always time to fight some
zombie pirates on your birthday... 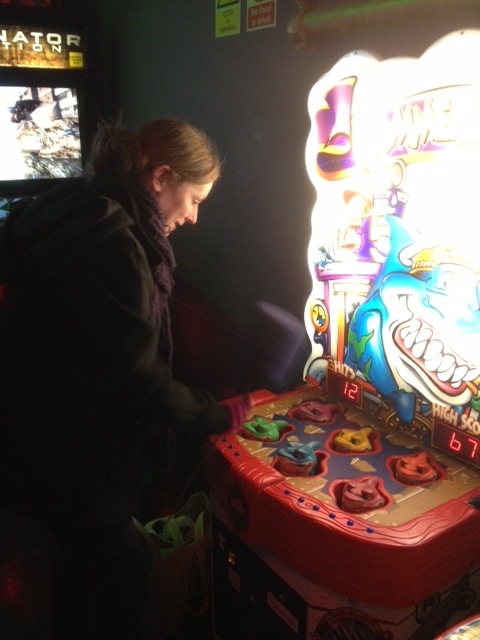 ... And enjoy a bit of Whack-a-Shark
Although my reactions are obviously a lot
slower now I'm an old bastard

I'm partial to a bit of gawping where rock memorabilia is concerned, so Hard Rock Cafe was the obvious choice for tea.

Here's a little fact for you. Hard Rock London was actually the one that started the whole chain, after Eric Clapton gave them a guitar in order to reserve a place at the bar. And it's still there today.

My giant slab of a cheese burger was amazing, as were the onion rings that were big enough to wear as bangles on my scrawny lady wrists. Oh and I highly recommend the mojitos as a way of numbing the pain of becoming a 30-something. 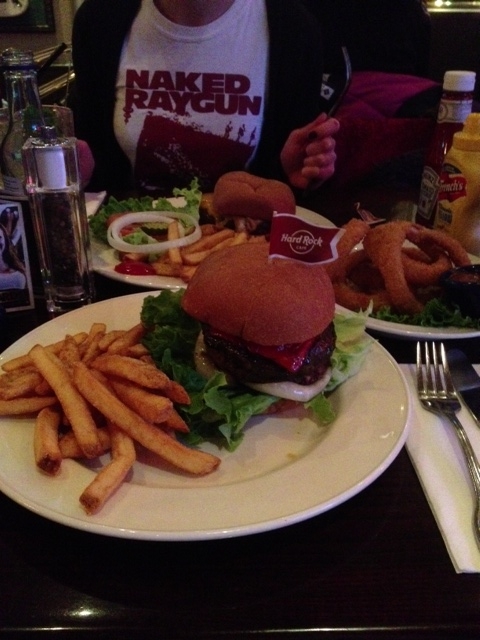 This was the best cheese burger I've ever had.
Thanks to my best friend Steven for pointing out my photobombing boobs 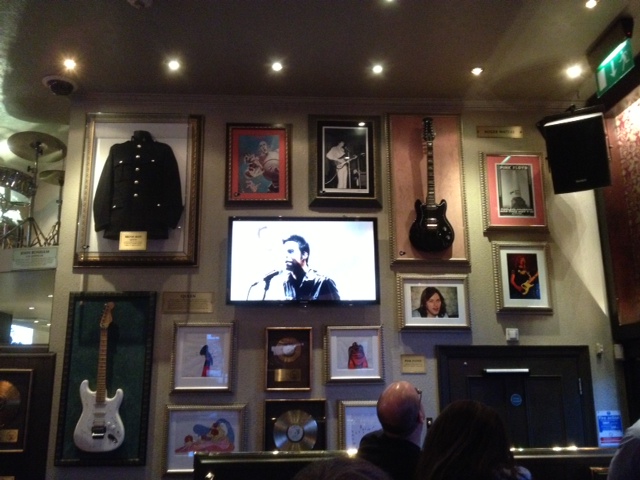 View from the table: Cool shit that you want to take home but aren't allowed to.
The drumkit you can just see on the left was John Bonham's
of Led Zeppelin and the black coat belonged to Queen's
Brian May. Not sure who the bald guy belonged to.


The walls of the place are jam packed with stuff, so there's a lot to take in. The only problem is that you can only really look at what you can see from your seat as the tables are crammed in so tightly it's hard to have a wander round and look at everything. But I guess that just gives me an excuse to go back sometime to see the rest. 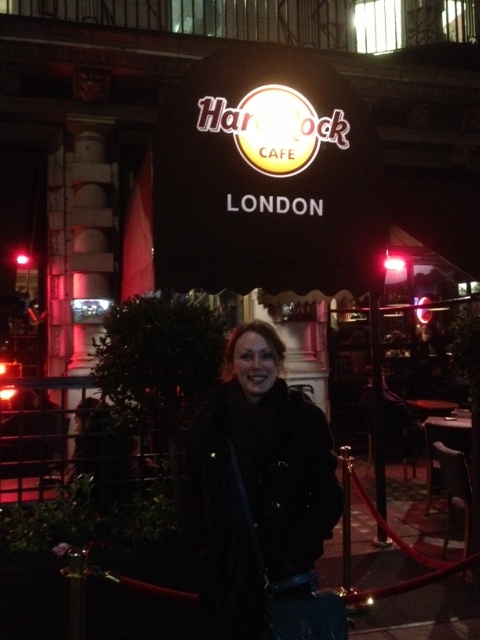 Post-burger: Approximately 14lbs heavier and
about to burst out of my jeans at any second


We Will Rock You

I have a little confession to make. I've never been that keen on musicals. Apart from Grease, which I will happily watch anytime due to its killer songs, awesome dresses and hot looking John Travolta, I have always struggled to sit through musicals. I promise you I have tried. I even watched a bit of Moulin Rouge once, but that probably ranks among the dullest 30 minutes of my life. Either that or the bit of Dirty Dancing I watched once. They were equally as shit, so it's a close tie.

Anyway, as this musical is based entirely around Queen songs I thought there was a chance I might like it. And it's written by Ben Elton, so I was confident it would have some good laughs. But if it did end up being shit I figured I could just sit in the theatre doing this...


We Will Rock You is basically a piss take of manufactured music and is set on iPlanet, where everyone dresses the same and thinks the same, and where all music sounds the same. I've spent my entire life feeling trapped in that world, so I could instantly relate.

The story follows a group of rebels who are trying to bring back real bands and proper music. It's very cleverly written with little references to Queen lyrics everywhere and lots of laughs. And of course, lots of singing! But it worked and I absolutely loved it. I may not be a complete convert to musicals, but if the soundtrack kicks ass then I'll happily give it a go. 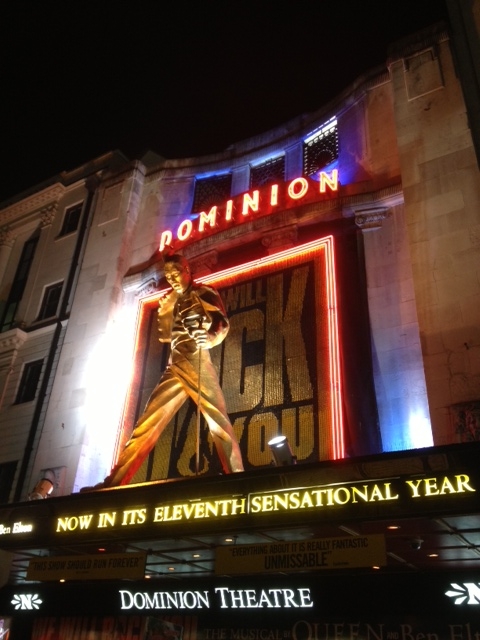 Other stuff that shares my birthday

Ok, so according to the weird world of Wiki, 1st March is also...